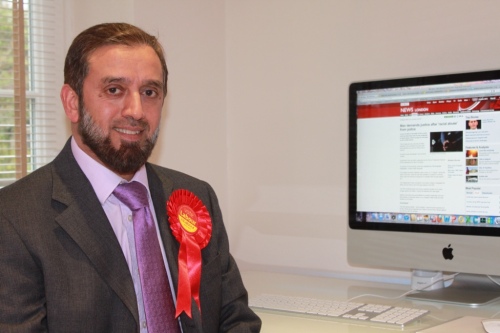 Ibrahim Master is on the shortlist for the Labour nomination to be the Police and Crime Commissioner in Lancashire. If you are intending to stand to be Police and Crime Commissioner where you live, you can submit your own Candidate Statement, so get in touch at Editor@TopOfTheCops.com – Others are on the way, and we are looking for 400 words, a photo (of you!) that you have rights to, and preferably an imprint, which will be needed for the formal election period later this year.

I believe my credentials to become Lancashire’s first Police and Crime Commissioner are second to none. In addition to being an active Labour Party member for over 20 years and a successful businessman, I have also enjoyed much success working for various public and voluntary sector organisations.

Most importantly, my thirteen years as an Independent member of the Lancashire Police Authority has provided me with the necessary experience and skills of holding the Chief Constable to account – and I am not the only one who feels this way; I have amongst my endorsers some of the most esteemed public figures in the realms of law and order, including Rt. Hon Jack Straw MP, Baroness Ruth Henig (President of the Association of Police Authorities and Rt. Hon Keith Vaz MP (Chairman of the Home Affairs Committee).

I have an in-depth insight into the inner workings of what constitutes a successful Police Force. Given the breadth and depth of my experience, I am confident I can hit the ground running from day one – a luxury which is out of reach for candidates with limited experience of policing and community matters.

My work with a diverse range of community organisations has made me acutely aware of the disparate needs of the communities – which again will be crucial to the success of a PCC in reaching out to the stakeholders he will serve because shaping and delivering an effective and efficient policing service based on the needs of our communities and stakeholders is a key feature of how a PCC will need to work.

Over the next few weeks I will be campaigning, as I have always campaigned for the last twenty years, up and down the streets of Lancashire to drive home the message that a vote for Labour means more safer, secure communities. With all the cuts announced by this government, we need to emphasise Labour’s amazing achievements during their time in power. When Labour left office in May 2010 there were a record numbers of police officers (16,500 more police and 16,000 new PCSO’s than in 1997). Crime had fallen by 43%: the chance of being a victim was at its lowest since records began.

Those halcyon days seem like a distant memory given the alarming rise in crime over the past two years.

It is a moral imperative to arrest this decline and to secure the safety of the good people of Lancashire, that has compelled me to stand for PCC.

More information on my campaign can be found on www.imaster.org.uk

Like Loading...
This entry was posted in Candidate Statements, Labour and tagged Ibrahim Master, Labour, Lancashire, Police and Crime Commissioner. Bookmark the permalink.