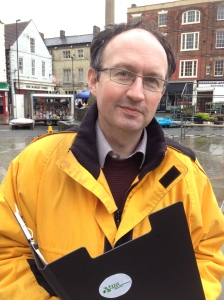 Dr Lee Rotherham is seeking the Conservative nomination to be the Police and Crime Commissioner for Lincolnshire. If you are intending to stand to be Police and Crime Commissioner where you live, you can submit your own Candidate Statement, so get in touch at Editor@TopOfTheCops.com. Others are on the way, and we are looking for 400 words, a photo of you that you have rights to, and preferably an imprint, which will be needed for the formal election period later this year.

It’s customary in these vignettes for candidates to express how they love their county, will be tough on repeat offenders, and want to see more police visible on the streets. I’m not one to differ on any of these points, having once handcuffed myself outside a police station in protest at the government red tape keeping the officers inside.

But you can find out all that about me and how I love animals on my campaign website – www.lee4lincs.org. Sam’s excellent website deserves more.

If you go down to Lincolnshire Police HQ, you’ll find the car park absolutely chocker. Parking is a pain. While fruitlessly exploring it once, I devised a Car Park Test for candidates.

A bad candidate would note the difficulty he had in parking up, and has already mentally marked a reserved space near the front doors.

An indifferent candidate would reflect on the large numbers of vehicles, and ask how much it would cost to build an extension.

A good candidate, however, would ask if all those cars really needed to be there, or whether any of the drivers could be out on the beat.

I believe a good slice of what a Commissioner can bring to the role is through outsider questioning. He can do it without treading on the Chief Constable’s toes operationally.

For instance, there’s the discovery I  recently made through an FOI that, over the last 12 month period for which figures are available, our small Force was responsible for 171 vehicle accidents – equivalent to two cars in five from the fleet. Nobody could justify the rate, evaluate the risk to the public or officers, or point to any remedies undertaken.

Another question: are there still three employees of the Lincolnshire Force paid for, by the taxpayer, to do union activity? I believe that’s plum wrong. The Commissioner should pull that funding, instead allowing direct access for genuine concerns to be raised.

Or why does no-one know what proportion of burglary arrests have actually ended in a served jail sentence?

These are fair questions currently being missed. Yet the PCC role is vastly bigger. I intend to be seen as the “and crime” commissioner, personally intervening to plug liaison gaps. I’ll bring support to victims, by serious institutional reform along the British Columbia model if needed.

Some question the need and initial cost of the Commissioners. I say it depends on the candidate.