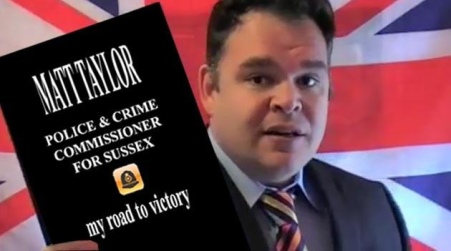 Matt Taylor is the S.O.S. Party Candidate for Police and Crime Commissioner in Sussex. If you are intending to stand to be Police and Crime Commissioner where you live, you can submit your own Candidate Statement, so get in touch. Others are on the way, and we are looking for 400 words, a photo of you that you have rights to, and preferably an imprint, which will be needed for the formal election period later this year.

My name is Matt Taylor and I’m standing in the November 15th 2012 elections for the office of Sussex Police and Crime Commissioner.

I’m doing so because if I don’t someone else less scrupulous than myself will.

In these times of strife and uncertainly for the public and the police, the office of Police and Crime Commissioner will be vital and necessary, taking on a great burden of responsibility.

Remember these elections are the first in British history. It has never been done before and we are the first to shape its future. We are making history, after-all.

With the eyes of future generations watching, the office of Police and Crime Commissioner must be the best it can be.

First and most it must be impartial and independent.

In fact I’ll go as far to say that it is vital that any candidate with a political membership card doesn’t win. In one foul stroke, the Office of Police and Crime Commissioner will be tainted with political influence and strangled by the party whip.

So if it helps you make your decision easier, I am TOTALLY independent of any political party. I will not tow the party line and know only one type of handshake, the honest and firm type.

Plus, I’m the only candidate who’s been a Royal Military Policeman. I know what it is like to serve as a Policeman. I am the Policeman’s friend. I will respect and assist the Chief Constable by building strong relationships with the community and ensuring he has all the tools he needs to best serve and protect the people of Sussex.

Transparency and accountability must also be addressed.

During my research I have come across a disturbing amount of allegations of corruption against Sussex Police.

You only need to type Sussex Police into Google and something about corruption appears on the first page.

It is with this in mind, I’m standing on an Anti-Corruption platform.

NO ONE IS ABOVE THE LAW.

To find out more what these projects are, please check out http://www.sosparty.co.uk and join me making them a reality.

Like Loading...
This entry was posted in Candidate Statements, Independents and tagged Police and Crime Commissioner, Sussex. Bookmark the permalink.